Pik Kommunizma – no way up

Three helicopters carried the rest of our compatriots back to civilization, which means it’s just the two of us now. What’s worse, even though there are some eighty people in the basecamp, nobody wants to go up yet. Fortunately the six Estonians skipped Korzhenevskaya and can’t wait any longer. Ok, eight people should be enough for tackling that three-headed monster up there. Off we go! 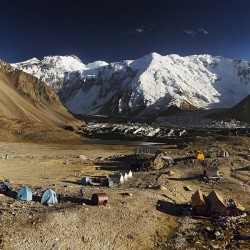 Camp one is located on a snow mound at about 5400 meters. To get there you need to cross a glacial ramp constantly bombarded with avalanches and then make your way through a band of rotten rock secured with a few ancient half-attached fixed ropes. I’ve had a bad feeling when it started snowing earlier today. And this time it didn’t stop. Thirty hours and two meters of fresh snow later, the Estonians started to look uncertain and said they’re only going to brake a trail the next day without backpacks and maybe continue to the camp two the day after. All six of them started plowing their way up through the snow and after 100 vertical meters they gave it up and returned back to the camp. It all seems to me like a waste of precious time and energy, but we don’t know the way up (here it’s a rather obscure zig-zag among seracs on a broad ridge) so we’re all staying in the camp one together for the time being. Pity, because today is the first clear day in ages.

We’re about to have dinner when the solitary figure suddenly appears on the horizon above us. Oh, so there really were some people higher up on the mountain… Upon spotting us, the guy throws his backpack away and runs down to the camp. Young Ukrainian. His friend fell into a crevasse. Shit… Where? Some 300 vertical meters above? We’re quickly gearing up and following him through the heavy afternoon snow. It looks more like swimming than climbing, but with the last rays of the setting sun we’re finally there. A hole in the ground, 10×2 meters in size, and a pair of tracks leading right into it. Fuck… No sound from bellow so we’re lowering the Ukrainian to the icy cave with a shovel. After ten minutes that seem more like an hour to me he’s back. “Tons of snow… Nothing else”. He lights a cigarette and stares blankly into the void. This really is a fucked up beginning of the climb!

We descend back to the camp without a word. It’s almost midnight now. Michal says he’d had enough of this and was going to go down tomorrow. The Estonians hesitate and i’ll probably stay and see what happens. The night is clear and it’s freezing cold. I finished my half-prepared dinner and can’t fall asleep for the most of the night. 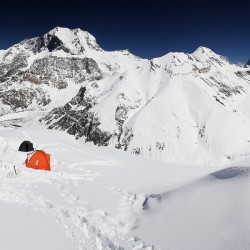 So we do go up after all. It took another two days, but better now than never. The Russian guides arrived yesterday. Summoned by our SOS signals from the crevasse, they started to organize retrieval of the body. Behind them there was a numerous group o Ukrainians and we all decided to go to the camp two today.

The way up to the plateau is not really technical. A long slog through deep snow with an occasional crevasse or a steep step. The camp two is situated on a small platform in the middle of the pillar (5800m) and is sheltered by a large serac. There’s only space for about ten tents (if you dig long enough), there’s almost no sunshine during most of the day and with constant spin drift from the serac, it looks like one shitty camp site. But nobody wants to continue another 400 vertical meters to the camp three today, so we all take out our shovels and start digging. Me, the Estonians, the guides and a few Ukrainians. The rest arrives early in the morning so it’s beginning to look like we’re gonna go up in a group of some 30 people. Not bad, given I just spent two days in the camp one thinking i’m gonna have to climb this thing alone. 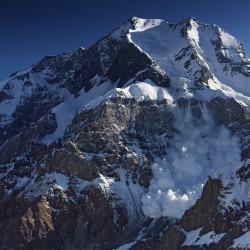 The Big Pamir Plateau is a rarity. Seven kilometers of a flat glacier sitting at six thousand meters some two kilometers above the surrounding terrain. The first impression is mind-blowing for several reasons. It is the first time we can see the actual summit. Not only that. It’s also the first time we can see the snowstorm approaching from the north that’ll hit us in a few minutes. And finally it’s also clear now the paper with the route description I have is wrong and the plateau is actually way lower than we thought. We’re building the camp three on the bottom and the altimeter reads 5800 meters. Which means we had to descend 400 meters from the top of the pillar and we’ll have to ascend the same 400 meters on our way back. Ouch… The evening is clear and amazingly beautiful though. The weather cleared, full moon rises above the main summit and it got freezing cold. I crawled out of my down sleeping bag for a minute to shoot one panorama and my hands nearly fell off. This is gonna be a long night…

All fun is over past the camp three. There are almost no places for tents in the camp four, it’s all really high now, it’s starting to snow again and nobody wants to stay here longer than necessary. That means even the Ukrainians are setting off before noon this time. Still, it takes us almost the whole day to reach the camp four during the increasing snowfall. First suitable spot sits at 6650 meters and fills up on the “first come first serve” basis. There’s supposed to be one more place some hundred meters higher, but fuck it. I’m staying here. God knows how it looks like up there and i’m gonna be hacking a platform for my tent until dark anyway. And there’s no summit tomorrow – the snowfall only gets stronger.

Igor from Ukraine living next-door bangs on my tent and a kilo of ice crystals falls down from the frozen canvas. Am I alive, he asks. Right, I haven’t been out of the tent for the last two days, which might mean anything up here… It snowed and snowed and snowed. I laid buried in my sleeping bag. I tried to kill the constant sound of falling snowflakes with my dying mp3 player. I watched the calendar and I saw how the time was slowly running out. I thought, planned, calculated – the helicopter is coming in four days. My food will maybe last for two. I could maybe descend down in one… But the summit is still almost a kilometer away. To have a serious chance for a summit push in a meter of fresh snow, i’d have to go higher…

“Yes! I’m fine!”, I hear myself answering Igor while sweeping the crystals from my sleeping bag. “Shit forecast, we’re all going down now”, the voice from the outside says. “Are you coming too?”. This is it. I haven’t planned for this. Do I have a choice? I hesitate for a while, watching the calendar… But no. No, I don’t. In the end, common sense always wins. Even up here. “Yes, i’m coming!”. I open the tent and start to pack my sleeping bag…

It’s the 25th of August and I didn’t pack my tent before the first helicopter arrived. Ten tons worth of the military Mi-8 glides three meters above my head with a terrifying roar and scatters most of my stuff in a large radius. Shit, we really shouldn’t have built our tents on this spot for the last night… The sky is completely clear and the sun slowly illuminates the summits of the surrounding seven-thousanders.

We and are the last group to leave the basecamp this season. Pik Kommunizma, or Pik Imeni Ismail Somoni if you like long names, stayed unclimbed this year. Nobody reached the top. Not the Russian powerhouse Anton, not the guides, not even those two dreamers who wanted to climb the whole Snow Leopard in one season and ski it down as well. The basecamp chief repeated something about the worst weather in five years. Yes, that’s a good excuse, but it was not like that, really. We had five good days up on the mountain and that’s more than enough. But we wasted most of our time always waiting for someone else to break the trail… Oh well. What’s more important, we survived our little adventure and now we can start planning the next trips and expeditions. And who knows, maybe i’ll come back ere one day and finish “The Communist”. She’s not going to run away after all…

My name's Thomas. I traveled through 30+ countries, survived my death twice, ran a hundred miles in a day and climbed the world's eighth highest mountain.

And then I started writing about it...